If you are anything like I am and are fascinated by the idea of birthdays and all things birthdays, then chances are you might have heard of the term “half-birthday.” If not, then today is your lucky day, because now you just did. Think I’m kidding? I guarantee you I kid you not. Such a thing does indeed exist. Read on and you’ll see for yourself.

What exactly is a “Half-Birthday?”

Well it is simply a day that is approximately half way between your last birthday and your next birthday. While there is some measure of uncertainty about how to calculate the exact day a half-birthday will fall on, often because of things like the time of day one was born on—morning or evening for instance, or because of the existence of a leap year, and a few others. But nonetheless, the term does exist.

To prove that I am not making the term up, have a look for yourself at its definition in Dictionary.com. You can even go right now and pick up your offline dictionary wherever you are, and check it out for yourself and see if it’s real or not.

Now if you are a bit more convinced about the existence of such a thing, lets continue shall we…

So where or what exactly is the origin of half-birthdays? My research was unable to authoritatively reveal exactly it originates from, but one source has it that it originates in some western countries, where the original concept was meant to celebrate the growth of a new born baby, six months after, especially by hosting parties with family and close friends.

Another reason has it that in western countries, they are also meant to be an opportunity for school age children to celebrate their birthdays with their classmates in school, six months after, if their real birthday falls during a school break. Thus giving them an opportunity to celebrate with, and be the center of attraction among their friends and classmates for that day, as kids can often like to be.

If the above is indeed true, referring specifically to the celebration of a six month old baby, then I imagine such a thing either is, or would be appropriate for many African countries. I say this because I know for a fact that when a new baby is born in many parts of Africa, for the first several months, the baby does not get taken out of his or her home by anyone, say except for a trip to a religious house or the hospital, but certainly no socializing, and often times neither for the mother as well. So in this sense, unless people go to the new born baby’s house, they might not get to see the baby for many months.

Given the above, I imagine how a half-birthday might be a good way for the parents of the baby to introduce the child to a larger audience with a celebration.

So, as I said earlier, the concepts origins are from western countries, but it is fast gaining popularity for instance in Japan, and a several other Asian countries. One reported reason for the rise in popularity of the concept in that part of the world might have to do with the shrinking birth rates they have over there. Perhaps an additional birthday in a year is a way the parents' compensate for the inability to have multiple birthday celebrations, and the joys they bring, which they ordinarily might have been able to have, had they more children. But that’s just my personal take.

More on its popularity. This might perhaps best be seen from the fact that there are
approximately 425,000 results for the term in Google as seen in the following image. 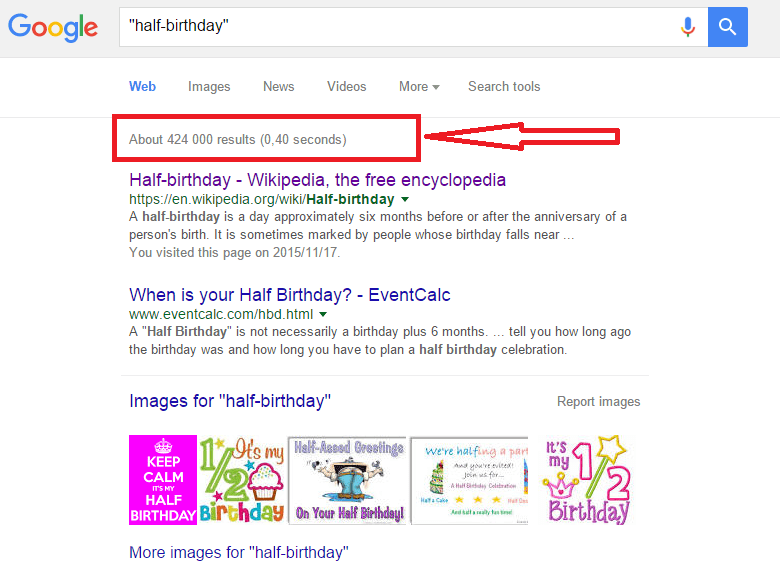 That’s almost half a million mentions of the phrase online. While admittedly 420K isn’t really that many in the greater scheme of things when it comes to how many people there are on earth, or the number of websites on the web, consider that there are also many search queries in Google that return only 2K or so results. Additionally, chances are there any many people who would know about and celebrate half-birthdays but just don’t go online to write about it.

While we are on the subject. Ready for another somewhat “bombshell?” Have you heard of the word “unbirthday?” Well, that word as well exists and has a meaning, and like half-birthday is widely used online. But that topic won’t be covered here, we will cover that topic at a later date.

So, back to half-birthdays. Perhaps the next thing you might want to know is how to calculate exactly what date is your half-birthday? Well, unless you are some super geeky mathematician, you will most likely be needing a half-birthday calculator. Or you can simply chose your birthday from this list and see your half-birthday beside it instantly. Go on, give it a try, even if you think it is a silly idea. For one thing at least now you (would) know.

Another potential advantage to knowing is that if you ever found yourself in a somewhat awkward situation where you are with someone, and the conversation suddenly goes dead, as happens to pretty much all of us, at least now you have one more conversation you can bring up.

Be sure to come back and thank me on this page. J

I would ask if you can guess who really are the people who celebrate their half-birthdays? But the answer should very easy: Kids of course. Which group of human beings love birthday parties the most if not kids? Can you then imagine the excitement and pure joy they would get from having, perhaps an excuse, to have not one, but two birthday parties within the space of one year? But besides that here are five possible reasons to consider for celebrating your child’s half-birthday. Feel free to pick the one that best applies to you or your child’s situation.

Perhaps the best way to get a good sense of the popularity of the trend is to take a look at this Pinterest search page result and see how many various results there are. And it’s not just your everyday mom and pop who are celebrating their children’s half-birthday, even celebrities are not left out.

It’ll however surprise you to know that many adults also celebrate their half-birthdays. With some even going as far as to give you 10 reasons why you should celebrate your half-birthday.

On the flip side, there are also opponents of the half-birthday concept and think it’s an absolutely silly idea, and is just one more way of parents going overboard in spoiling their kids.

Our Take on Half-birthdays

What is our take on the concept? We see it from two angles:

On one hand, being that we are about birthdays, and birthday mates, birthday buddies and all, we no doubt think it’s a great idea, and would even encourage as many people to celebrate their half-birthdays. Obviously. J

On the flip side, we also think everyone is free to do as they wish, provided they don’t become a nuisance to others. So celebrate your half-birthday or that of your child if you wish, but do not be offended at people you might invite who might think it’s a silly idea, even if they say it to your face.

Not recently active
This website uses cookies to improve your experience. We'll assume you're ok with this.